Ketsubakuchiku (ケツ爆竹, Butt Firecracker) is a character in the Keroro Gunso franchise.

Ketsubakuchiku is a small pink blob with one pink tinted eye, the iris being red. He was less than half the size of a normal Keronian, but has grown up by Episode 305. At the end of episode 305, he is reverted back to his small size.

Ketsubakuchiku is friends with the Keroro Platoon, though whenever his name is mentioned The Keroro Platoon shake and hold in their butts in fear. Originally him and Keroro do not get along, but by the end of their trip they get along well.

Kiko and Ketsubakuchiku get along really well. Kiko was interested in Ketsubakuchiku when she first went in the escape pod, and she saved him from Aksh by saying that he was her partner. Ketsubakuchiku is usually seen with Kiko during the Kero Zero Arc.

After Kiko's disappearance, Nobibi and Ketsubakuchiku team up to try and find her. Ketsubakuchiku sees Nobibi as a good friend, protecting him and the others from the alien in the Gundam Museum and going back with him to Keron.

Ketsubakuchiku is shown to be fun loving and really goofy to those he is close to. He does not have decent vocabulary since the only words he has ever said are "butt firecracker", "butt straw", and "hello".

He has the ability to shape shift into anything. In episode 305, he transformed into a Keron Military Rifle from the command of Nobibi to try to scare the platoon but their cover was blown when Butt Firecracker said his own name. 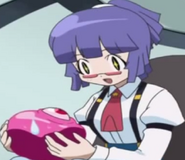 Nobibi, Kayoyama and Butt Firecracker.
Add a photo to this gallery

Retrieved from "https://keroro.fandom.com/wiki/Ketsubakuchiku?oldid=36737"
Community content is available under CC-BY-SA unless otherwise noted.