He was designed from the Keronian headquarters (from Colonel) to serve as a package to deliver a Sumomo plushie during Christmas.

He was first seen battling the Keroro Platoon, after Keroro and co. we're defeated so easily, the Kiruru was quickly smacked by Mois on the head using Hellmaggedon. Kiruru then drops the Sumomo plushie to the platoon.

X-55's appearance is similar to that of the original Kiruru version X-52, except he has an X with red surrounding it as his symbol, and is possibly made from liquid metal and can grow his left arm as a giant knife. His size is twice as or the same size of the Musha Kero robo. 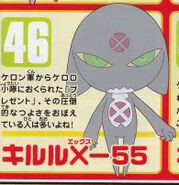 Kiruru X-55 in the manga
Add a photo to this gallery
Retrieved from "https://keroro.fandom.com/wiki/Kiruru_version_X-55?oldid=45766"
Community content is available under CC-BY-SA unless otherwise noted.