The Mare Ball (メアボール, Mea Bōru) is a ball-shaped superweapon appearing in Keroro Gunso the Super Movie 2: The Deep Sea Princess de arimasu!. It is the mystical counterpart of Keron's more technical Kero ball. It is mentioned that it is capable of drowning a whole planet with water, thus granting Maronians domination over it.

It looks exactly like Kero ball, except its red-colored with many blunt triangular buttons surrounding it with a picture of a Maron emblem and other logos on it. It has an antenna with a blue circular tip. 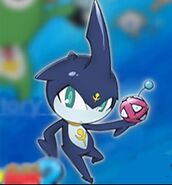 Add a photo to this gallery
This article is a stub. You can help the Keroro Wiki by expanding it.
Retrieved from "https://keroro.fandom.com/wiki/Mare_Ball?oldid=47039"
Community content is available under CC-BY-SA unless otherwise noted.