Maru (マール, Māru) is featured as an antagonist, then later as the protagonist in the anime movie Keroro Gunso the Super Movie 2: The Deep Sea Princess de arimasu!. She is a Maronian and the right-hand of Meru.

Maru is a "childhood friend" and assistant of Meru. They have been together for as long as they can remember before arriving in Pekopon. Just like Meru, she grew up from an unknown family and had no memories of her previous life on Maron.

Maru first appeared alongside Meru, when they defeated the Kiruru. She appeared in front of Natsumi Hinata after they brought her to Meru. Meru scolded her about blocking his way, at which Maru bowed, apologizing.

Maru appears to be more highly respective of Meru, since she helped to protect him and his love of Natsumi, disallowing Keroro and the others from taking Natsumi back. Maru told Meru to hand over the Mare Ball and transformed her right arm into a sword/scythe and she battled with Giroro, after Giroro is about to hit Meru, Maru defended her prince quickly as she mention to Giroro not to lay a finger on her Prince. Maru quickly defeated Giroro and became Meru's subordinate. In one scene, Natsumi asked why Maru wasn't the princess since she was Meru's childhood friend. Maru said that's just what the prince thinks and she is willing to protect him. Maru is seen walking in front of the window as she watches Meru and Natsumi heading to the sea.

It is revealed that they do not even know her own species, since she was shocked when Keroro mentioned that she is a Maronian. After realizing this, Maru turned to support Keroro and the others a bit, opening the door to Meru for them. When Meru turned even larger, she floated in place, shocked, so she changed her mind to stop Meru instead and defended Fuyuki Hinata and the others from getting killed instantly by Meru's arm cannon, saying Natsumi has her precious family.

As Maru came to rescue her prince, she was easily sucked in. After Natsumi and Keroro seen the two, she was seen unconscious and holding hands with Meru. While being rescued by Natsumi, Maru sheds tears in happiness. After heading back to the surface, Maru gain consciousness, and Natsumi transferred her tiara to Maru, becoming the new princess of Maron. Maru begin to hold hands with Meru, as they head back to Maron in their spaceship.

Maru appeared alongside Meru in Volume 20, they have Kiruru called "Kiruru X02".

Meru and Maru didn't forget who they are and where they come from. Like the Keroro Platoon, they came to Pekopn to invade. They found Kiruru in the bottom of the sea and used it as the ultimate weapon. Meru doesn't scold Maru much like in the movie, they are like partners. As a servant, Maru does worry about Meru's safety, especially when Kiruru X02 had loses control and traps Meru.

In the end, Meru and Maru hold each other's hand while smiling, as they return to Planet Maron by spaceship, even though Natsumi didn't ask them to become a couple.

Maru is a dark blue Maronian. Her crest on her head is shorter and longer ear-like flaps on her helmet. Like Meru, her symbol is the Maron emblem on her forehead and another one on her dress but its colored pink instead of yellow, and has shark-like fins on her wrists and limbs. Her skirt is jagged, and sky blue that matches the same color of her face and belly and orange lines on the lower part of the skirt. Maru's eyes, are larger and rounder shape like a teardrop. Her irises are similar to Meru's and Alisa Southerncross's and its colored magenta.

Maru is kind-hearted, mature, and loyal, but often gets trouble so easily when Meru scolds at her. Much like to Natsumi's attitude, she calls Keroro, stupid frog when she gets distracted, cause her to throw a tantrum as she orders her guards to attack him. Her personality changes into a serious and confident nature when it comes in battling. She also has a sense of humor, like she overdressed with make up to make her prince laugh.

Maru's appearance may be deceiving, but she is a very skilled and agile fighter just like Meru and a swordsman as was shown when she single-handedly defeated Giroro.

Meru- He is Maru's childhood friend and they used to be together before arriving on Pekopon. It appears that Maru had a crush on Meru before becoming princess since when Natsumi asked why she and Meru weren't getting married she blushed. Maru is very loyal to Meru, protecting him without a second thought.

Natsumi Hinata- She helps Meru find Natsumi to be his princess but later it didn't turn out to be as she was expecting. Maru sees Natsumi as a good friend, usually talking with her and playing with her. Natsumi herself seems to be much more laid back with Maru then with Meru.

Keroro- After Keroro returned to Natsumi's castle, Maru is annoyed to see him again, calling him stupid frog, just like Natsumi calls him. 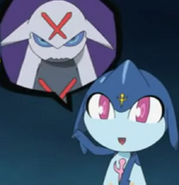 Add a photo to this gallery
Retrieved from "https://keroro.fandom.com/wiki/Maru?oldid=47925"
Community content is available under CC-BY-SA unless otherwise noted.