Meru (メール, Mēru) is a main character and the main antagonist in the movie Keroro Gunso the Super Movie 2: The Deep Sea Princess de arimasu!, and he comes from the planet Maron, along with Maru.

Meru is dark-blue color. Unlike Keronians, he wears dark blue helmet with short ear-like crests and a bigger crest on his head. His symbol is a yellow Maron star, which is located on his forhead and on his stomach. He has dorsal-like fins attached on his wrists and his feet and his eyes are triangular and are colored bright green. He also wears a yellow collar on his neck.

In the manga, Meru's Kiruru form has an X mark replacing his Maron emblem on his belly while on his forehead remains the same like his original form. His arms and legs are more stone-like and his dorsal fins are more pointed, mutated, and carved. He still wears his helmet on this form with a Kiruru-like mouth and his eyes are similar to Kirurus with random writings and lines all over his body.

Meru is shown to be somewhat strict, very childish, and sometimes a bit sarcastic. He is always blaming Maru for interrupting his talk or describing him as something that isn't true, but he still appreciates her actions. Meru is shown to be very much like an actually child, he is hyper and he will run head first into a new situation, and when he feels troubled or sad, he will cry. Meru in this way acts very much like Shin Keroro. Unlike Shin Keroro however, Meru can be serious and intelligent at times, but he is also shown to have a kind side, as seen towards Natsumi Hinata.

According to Maru, both Meru and her have no memory of how they ended up on Earth. They both had no knowledge of their childhood, family, home, nor race. It was during this time that Meru decided to find a bride, thus he sent out the Probe Nightmare to scout out for the perfect bride, while he and Maru lived alone under the sea.

In the manga, thanks to the Kiruru they own, the sea they live in had earned the nickname the Devil Sea.

In the second movie, Meru, together with his counterpart Maru, defeated a Kiruru that tried to destroy a ship, then he begins humming beautifully and he appears in the sky (as a shadowed figure) along with Maru and they then fly down, heading back to the sea. He appeared as a "sea fairy" in a ball of light.

He watched Natsumi through the "UMA", which Momoka Nishizawa brought to Fuyuki Hinata. Later, sea creatures brought Natsumi to Meru. He appears to have a stingray-like invention as he tells Natsumi not to worry, so she rides with him peacefully. He appears to be a bit childish as in Natsumi's dream world, he played a lot. He, and Maru played hide and seek together in the shopping mall, but then suddenly when Meru hid from Maru, who ran past him, he then began to search for her. Meru ended up getting scared and he hid in an elevator to cry in peace. Natsumi then finds him in the elevator and teases him that he doesn't know how to open the door. Meru flies forward quickly to Natsumi and hugging her while crying which reminds Natsumi of her past self, which leads Natsumi to hug back. Maru watches in shocks, as Meru blames her for losing him.

After traveling with Natsumi in the deep sea, he sang to her a song labeled Meru's Song, it is revealed during it that nobody cares about him, he then grabs the Mare Ball and is about to throw it down, when Natsumi stops him. In a silent conversation Natsumi holds onto the Mare Ball and allows herself to fall into a trance. It also appears the Meru has transformed into a more human shape.

Later on Maru opened the door to let Fuyuki, Keroro and Angol Mois inside. He yells at Maru for letting them inside when he told her not to, it is then revealed that he has Natsumi attached to him. Keroro and Fuyuki attempt to get her back, but Meru combines the Mare Ball with his arm and he threatens to attack Keroro and Fuyuki. He does so, after Keroro fails in using his Kero Ball, when Mois saved them by blocking the attack. Meru then states that Natsumi is his as he disappears back into his crystal, Keroro quickly tells Fuyuki to throw him into the crystal before it closes, which he does successfully. But, it appeared to have disturbed Meru's process, and he turns even larger, controlled by the Mare Ball, while Keroro is shown clutching onto Meru's shoulder. Momoka, in the Keroro Robo, goes up to attack, but Meru attempts to shoot her down, which was blocked by Mois again. However, the beams spiral into different directions, flooding the entire place since he broke the barriers. When Maru asked him to release Natsumi, he refused, and destroyed the shopping mall, which shakes Natsumi back to her senses, as she remembers that both her mother and her brother end up finding her.

Meru screams and yells in pain as he starts growing larger and shapeless like a purple blob. He screams for someone to help him and Maru quickly goes to save him, but Meru's stomach turns into a portal as Maru gets sucked in. Meru is shown lying unconscious as he clutches onto the MER Ball with one hand, while Maru reaches for the other.

Natsumi and Keroro come to rescue the two before it explodes according to Kururu while Mois and Fuyuki hold the rope to prevent Natsumi and Keroro from getting sucked in too. Natsumi finally finds the two and she grabs them to pull them up with them. Meru awakes and sees Natsumi as the Mare Ball glows and blasts them quickly out of the hole. Meru wants Natsumi to let him go, so she can save Maru, but she refuses. The rescue is a success as Mois flies them out on her Lucifer Spear, however they almost end up drowning. Natsumi then wishes to return to her home, as she promised her mom. And suddenly the house is shown floating in the water, as everyone sits tired.

Meru and Maru gain consciousness, as they both walk up to Natsumi, questioning where they are. Natsumi answers by saying it is her home, and where she belongs. Later on, it is revealed that Kururu has fixed Meru and Maru's ship and that he programmed it to head back to Maron. Meru and Maru are shown thanking Natsumi, as Maru refers to her as 'Princess'. Natsumi then states that she is no longer the "Princess", so she transfers her tiara and title to Maru, becoming the new princess. He and Maru blush at each other, as Natsumi pulls them in for a hug, they are then shown flying away as everyone waves goodbye. In the credits, the two royalties are shown amazed at the sight of Maron as their original home, and appear to be ready to explore.

They are mentioned briefly in Movie 3 as Natsumi states that they took down the second Kiruru.

In Volume 20, Meru has a Kiruru and use it as his servant and a superweapon. The transformed Meru resembles a Kiruru, a reference to the movie that he turn into a ferocious monster.

Despite his young age, he is suggested to be a skilled fighter just like Maru, though he does not express his skills with the Mare Ball fully until the climax of the movie. He then transformed into a human-like being and hypnotized Natsumi.  He became even larger after trapping Natsumi to him, and then became even bigger and more infuriated to the point of the Mare Ball going berserk.

He is also shown to be able to materialize thoughts and memories from Natsumi's mind through the Mare Ball, thus they become real. He created an entire city including a castle, and also changed Natsumi's clothing and his appearance (to that of Mutsumi Saburo).

Prince Meru and Maru (now the princess) before marriage. 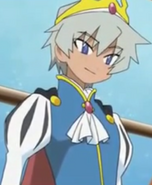 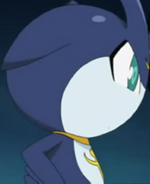 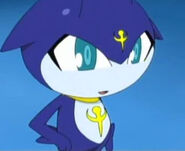 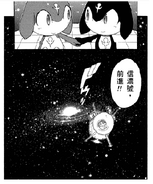 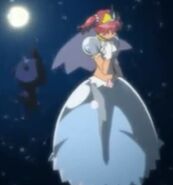 Meru in his introduction. 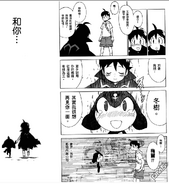 Add a photo to this gallery
Retrieved from "https://keroro.fandom.com/wiki/Meru?oldid=50354"
Community content is available under CC-BY-SA unless otherwise noted.