Meruru (メルル, Meruru) is a character in the Keroro Gunso franchise.

She is a postwoman on Keron, and she delivers all throughout space to Keronians.

Meruru is a member of Keron's official postal service as she seen first debut in the anime.

She comes to Earth to deliver a message for Keroro, which he tries to avoid receiving, thinking that it is a message from head quarters (but turns out to be a letter from Shupepe, a long-time friend of Keroro, Giroro and Dororo). Meruru is dedicated to her job to the point that she maneuvers her way around all of the platoon's attempts to detain her, including cloaking devices, guns loaded with capsules of sticky gunk, evasive driving and Tamama's farting (which Meruru isn't slightly bothered by and possibly likes). At the end of the episode, she deliver a package to the Hinata residence, revealing to be a bouncy, slimy alien bouncing across the kitchen, leaving Natsumi screaming.

She appeared again in Kero 0: Depart! Assembly of Everyone!!; she is seen delivering the Kero Ball to Keroro because he forgot to bring it and finally reunites with it, made Meruru embarrassed and proud.

She resembles Pururu, but with a different color scheme. Her eyes are green and her skin color is hot pink. She wears a sky blue hat with cat ears pointing downward and yellow spheres on her flaps. Her symbol is a mail letter that is red on her belly and white on her hat.

Meruru is shown as calm and kind in the anime. Meruru also doesn't seem to react despite analyzing Keroro Platoon's peculiar materials.

Her name comes from the Japanese for mail, mēru (メール).

Meruru riding on her hoverbike. 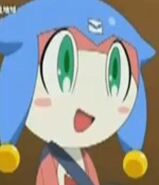 Meruru in her first appearance in episode 228.