These are various minor characters that appear in the Keroro Gunso franchise, but aren't named or, if named, make no relevant on screen appearance.

The Doinaka Beauties appear in Episode 223 after Natsumi, Yayoi, Koyuki, Satsuki and Momoka fall off the cliff after trying to save Keroro.

This Manga Author works under Aki Hinata as an artist for Shonen Alpha(Shonen Kuro in the manga). He appears in the first chapter (episode 3 for the anime) where his manga proposal is rejected by Aki. Later on though, they meet again at the Coffee Shop Forza (episode 21 in the anime) and she accepts his new idea.

Parallel World Natsumi is a minor character featured in episode 205. She is the sister to Parallel World Fuyuki and she appears briefly questioning who Fuyuki is talking to in his room.

Dolphin's Parents are the mother and father to Dolphin. They first appear in Chapter 190 of the manga and Episode 13 of the Flash Series. they appear nearby an island when Shin Keroro notices them. They are later seen watching Shin and Dolphin say there goodbyes.

Tamama's Friends were Tamama's previous Kindergarten Friends. They first appear in Chapter 183 and Episode 12 of the Flash Series. They appear briefly in a flashback when Tamama is reminded as to why he hated pick up during kindergarten, due to the fact that no one would come to pick him up. The red tadpole has a heart symbol much like Sumomo.

Tarere is a minor character mentioned by Dororo in episode 189. He is a Lance Corporal[RANKS], mistaken for Zoruru.

The novice manga author in the Anime.

The bottom of some of the Beach Beauties.

Tamama's Friends in the manga. 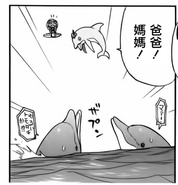 Dolphin's Parents in the manga.
Add a photo to this gallery
Retrieved from "https://keroro.fandom.com/wiki/Minor_Characters_in_Keroro_Gunso?oldid=47056"
Community content is available under CC-BY-SA unless otherwise noted.