When the first crisis involving Kiruru started in the modern Earth, a cheerful Keronian appeared, piloting a vehicle shaped like a Shakokidogu. Giroro recognized it as one of the weapons they had seen underground previously. The movie doesn't specify, but it looks identical to the Planet Submission Weapon from Episode 27-B. The pilot of the robot claimed to be Mirara, a weapon researcher for the ancient Keronian army.

Mirara acts like an innocent and curious girl, but her actions were actually deliberately done to bring conflict between the Keroro Platoon`s members and their human friends, hoping to test the strength of their bonds, the only weapon able to stop that ancient Kiruru.

In her standard form, she looks like a young dark pink Keronian, including a tadpole tail. However, she wears clothes besides her pink hat, including a long sleeved dress and shoes. Differently from most Keronians, she doesn't have a symbol on her belly, rather than that, there's a red circle on her dress. She has large, but slanted, blue eyes and also small glasses which she keeps on constantly.

In her key form, she is very massive taking up to two people to carry her, as shown by the combined effort of Keroro and Fuyuki Hinata to carry. The key is mostly pink with red lines connecting with the blue orb in the middle, the orb flashes when Mirara speaks.

Mirara is actually an artificial Keronian, part of the "Self Decision Making Ultimate Invasion Weapon: KiruMiran". The one to carry through the invasion was Kiruru, the decision maker was Mirara. When Kiruru was sealed by the ancient Keronian army, after destroying Earth's dinosaurs, like registered in the shrine where the seal was kept, she was sealed alongside it.

In the present, after Kiruru is freed, so is she. She inspects the ones who freed Kiruru testing their bonds, finally deciding that their feelings might be enough to defeat Kiruru. Their X marks given by Kiruru becomes circle marks and she reveals another form to Fuyuki and Keroro, a giant pink key, which would be used in the center of a tower created by Kiruru's growth, sealing him again, alongside her.

While running up the stairs, Keroro comments on how heavy Mirara is, which makes her angry. They put the key into place, and after a big flash, everything is back to normal. Kiruru disappears, alongside Mirara. She leaves a final message to Fuyuki and Keroro, telling them to never forget that the person next to them is an important friend. Mirara is more of the positive side of Kiruru. 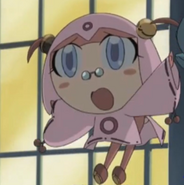 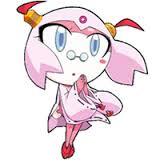 Retrieved from "https://keroro.fandom.com/wiki/Mirara?oldid=49547"
Community content is available under CC-BY-SA unless otherwise noted.