Miruru (ミルル Miruru, Miruru) is an antagonist in the anime movie Keroro Gunso the Super Movie 3: Keroro vs. Keroro Great Sky Duel de arimasu!, which is based on the series Keroro Gunso.

Miruru as seen in some scenes in the movie, has more of a heart than the other members of her group. Her intelligence was rivaled with Kururu. She also seems to be able to transform into Nazca.

Her name Miruru is possibly from Mirara of the first movie, since Miruru is the key to the third Kiruru.

Appears in the third movie. Miruru works for Dark Keroro, causing trouble for Pekopon. Her mission is to follow (not destroy). She was released (accidentally, by Keroro) from imprisonment in a crystal chamber deep in the ruins of Macchupicchu in Peru. Dark Keroro recruits her into his fledgling platoon, where she turns into the system operator of his massive battlecruiser. Sharing Pururu and Sumomo's ability to disguise herself as a human, she assumes the name Nazca and lures Fuyuki into a trap. At the end of the movie, Miruru is revealed to have the same role as Mirara in the first movie, intended this time for sealing Dark Keroro. Afterwords Miruru's spirit disappears, as her key is taken away by the Garuru Platoon.

Miruru is a pink, blue-eyed Keronian resembling a fennec fox. Her pink hat has pointed ears. The edges of the ears are striped white. Her yellow hair hangs out of those ears. Her symbol is a blue, upside down triangle. She has a short white fox tail. She wears a shirt with long sleeves.

In her key form, it bears very resembles to Mirara's key form except its much smaller and short and her ears are still exposed. 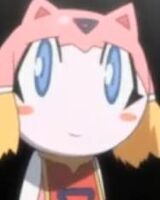 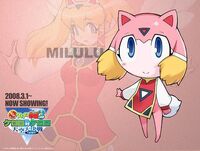 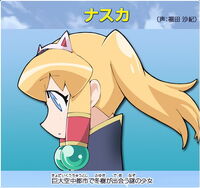 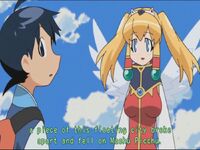 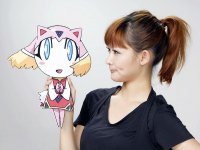 Miruru in her Key Form 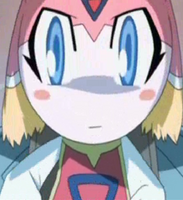 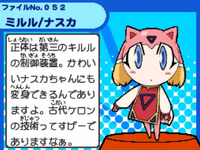 Miruru key form.
Add a photo to this gallery

Retrieved from "https://keroro.fandom.com/wiki/Miruru?oldid=43944"
Community content is available under CC-BY-SA unless otherwise noted.