Unlike most of the characters, he dosen't live on Sengoku, but on Portuga. He looks just like Mutsumi Saburo, but with a timid personality. He loves to draw manga art (which he is not good at), but later Kururu influenced him to try poems, and he agrees. He is also one of the guardians who saved the planet and remembered just as he was about to leave the planet and when his weapon came to him.

Mutsuzou's name, 六二三, is composed of the Chinese characters for six, two and three, respectively. 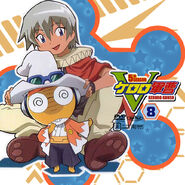 Mutsuzou with his partner, Kururu

Retrieved from "https://keroro.fandom.com/wiki/Mutsuzou?oldid=45957"
Community content is available under CC-BY-SA unless otherwise noted.