Nazca, despite being Miruru in disguise, acts very different. Nazca is very calm and serious, almost like a robot. However, whenever Machu Picchu is mentioned she always cracks a smile. At the end she acts very playful when she is about to leave, winking at Fuyuki Hinata and striking a "see-you" pose.

Nazca has only 2 known destiny powers. The first one is hypnosis and the second one is flight.

Nazca, as Miruru, lived in Machu Picchu and laid dormant for quite some time. However when Keroro leaned against Miruru's key form, after sneaking into her temple. Miruru was released from her dormant stage in the form of Nazca. Fuyuki saw her and wanted to help her, but she disappeared. Nazca is later seen standing on top of a mountain, watching the Keroro Platoon leave, she then flies off.

Later, when Fuyuki is falling, Nazca comes in and saves him. Nazca sets Fuyuki down, and she asks what he was doing near the ship. Fuyuki tells her he was looking for his friend. Nazca accepts this answer and flies off.

Later when Fuyuki was separated from the and found the Kero-Ball, Nazca appears once again; this time she explains how Machu Picchu and Super Space are connected. She seems slightly surprised when Fuyuki understands what this means, but is happy about it. When Fuyuki asks who she is, Nazca tells him to come with her. She then hypnotizes Fuyuki and carries him away.

Fuyuki later wakes up hearing Nazca speaking with someone else. When Dark Keroro is revealed Fuyuki says that she lied to him. Nazca denies this, saying that he wanted to know who she was. Nazca then proceeds to turn back into Miruru, shocking Fuyuki.

Nazca finally reappears at the end to say goodbye to Fuyuki. Later on the Garuru Platoon takes Miruru's key, including Nazca.

Nazca makes a a cameo in the Keroro (Flash Series) on the Hinata's TV in episode 12. 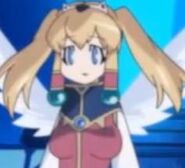 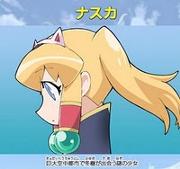 Nazca, Natsumi and many more people in a Keroro book. 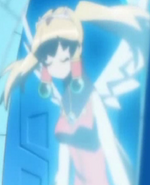 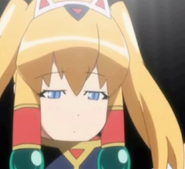 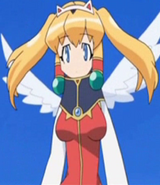 Retrieved from "https://keroro.fandom.com/wiki/Nazca?oldid=51100"
Community content is available under CC-BY-SA unless otherwise noted.