Nobibi (ノビビ, Nobibi) is a character in Keroro Gunso.

Nobibi made his first appearance in Episode 305 of the anime, although he was mentioned many times beforehand by Kiko Katoyama. His appearance is somewhat of a dark aqua-blue Keronian tadpole, with a green helmet like that of Tororo's, but with a propeller on the top, as well as glasses. He also carries a small white bag that his friend Butt Firecracker appears to live in. His symbol is a red pencil.

Nobibi is spoiled and quick tempered towards the Keroro Platoon. He is also shown to be playful and kind towards his partner, Kiko.

Kiko - Kiko was Nobibi's partner after landing in Planet Keron. She drew toys and gadgets for him, although that eventually led to her getting recruited by the Keron Army and them separating from each other once she was assigned to the Grand Star for Earth's invasion. Years later, after she didn't return, he'd go to Earth after her, believing her to have been captured by humans. After realizing she was fine on the planet, he thought she had forgotten about him, but upon seeing a toy based on one of the robot drawings she made for him, he realized they wouldn't forget each other and one day would meet again.

Butt Firecracker - The mysterious blob alien returned to planet Keron and befriended Nobibi due to their shared connection with Kiko. He's usually carried in a bag and turns into various tools to help him.

Nobibi's name comes from Nobita Nobi (野比 のび太, Nobi Nobita), the main human character from the anime and manga series Doraemon. Not only his name, his design, with the round glasses and small irises also are heavily influenced by him. Nobibi's hat resembles a propeller beanie, which is the form often taken by the Take-copter, the most recurring gadget in Doraemon. His attachment to Katoyama Kiko (who wears an outfit in Doreamon's colors and drew up toys and gadgets for him) also seems to mirror Nobita's with Doraemon's. For his on screen appearance in the present, Butt Firecracker also took the Doraemon role, turning into tools for Nobibi.

Nobibi have a gun that is Butt firecracker. 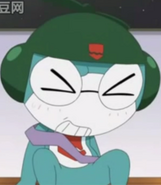 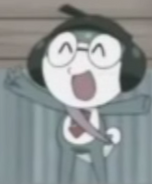 Add a photo to this gallery
Retrieved from "https://keroro.fandom.com/wiki/Nobibi?oldid=49071"
Community content is available under CC-BY-SA unless otherwise noted.