They first appear in Keroro Land and Anokoro Keroro Gunso before appearing in the anime as a member of the Shurara Corps.

Originally an abandoned Keronian doll, Nuii was brought to life by Shurara and was made a member of the Shurara Corps as Seamstress Nuii (御針子のヌイイ, Ohariko no Nuii). When Natsumi Hinata shows Nuii the ribbon (which was put on the abandoned doll), Nuii seems to feel empathy toward Natsumi, assumedly being reminded of their old owner. In the end, Nuii returns to Keron to find the person who took care of them when they were young.

Nuii is one doll of many similar to them, as versions of the Nuii doll are seen in Kero Zero: Keroro Platoon: First Mission, de arimasu, in a flashback with Pururu, and Kururu mentions having one when he was younger.

As stated by Gyororo, their personality is originally one of a pure-hearted, innocent stuffed toy.

Nuii is an orange doll. Their pupils are large buttons and they have rosy cheeks. Their symbol is a yellow button with a cross at the center that lay on their forehead, stomach, shoulders, and hat flaps. They have stitches on the side of their legs, arms, and hat flaps.

Nuii can turn an enemy into a doll with needles that they shoot out of their arm. They can also change their appearance to look like another similar doll, and hover a few inches off the ground.

Like all dolls, too much fatigue can tear Nuii apart.

Natsumi- Natsumi had a toy Kuu-chan when she was younger, and did everything with her. Natsumi's mom then made Natsumi leave Kuu-Chan at a garbage pile. A few years later, Natsumi found Nuii, disguised as Kuu-Chan, exactly in the same condition, and she brought her home. Natsumi was unaware of Nuii turning her friends into dolls, and when Keroro and Kururu confront her, Natsumi says they're wrong and she runs away with Nuii. After Nuii reveals to have done it, Natsumi still doesn't believe it. However, Natsumi seems to remind Nuii of their previous owner, as when Nuii was about to attack Natsumi, Natsumi showed the the bow and they stopped. Nuii even stopped Gyororo from harming her. Later on Nuii says goodbye to Natsumi to search for their original owner on Keron.

Toriri- In Anokoro Keroro Gunso, Nuii was placed on Team Keroro. Toriri seems to take care of Nuii, and treat them much better than the other members. 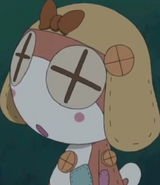 Nuii Patched up by Natsumi

Nuii with their original owner back on Planet Keron.

Nuii's rehabilitation
Add a photo to this gallery