The Nyororo (ニョロロ, Nyororo) is a fictional creature in the series Keroro Gunso. It is a yellow space plant that loves humidity.

As revealed in Episode 164 A, 100,000 years prior, Nyororos were originally harmless space plants known as Niroro (ニロロ, Niroro) which were left in starvation on a drying planet. At that time, a huge meteor crashed the planet, resulting in the whole population of Niroro's mutation into the monster known as Nyroro. When a Nyororo infiltrated their spaceship, the Keroro Platoon escaped via a wormhole that took them 100,000 years into the past. Suddenly, Keroro devised a plan to erase Nyororos from existence after arriving in said era. While landed themselves on the Planet which populated by Niroros, Angol Mois manages to destroy the meteor with her Hellmageddon, but as several chunks of the meteor are about to hit Keroro, the Niroros shield him. Keroro then waters one of the Niroros with his drink as thanks for saving him.

However, once they arrive back in the present era, they realized that the Nyororos still in existence. Kururu reveals that because Keroro watered the Niroro with some of Keron's water, the Niroros found another method of evolution into Nyororo.

They are attracted to areas of high humidity and prey on Keronians (like Keroro), which they swallow using the opening on their tail end. They then squeeze the moisture out of them, and spit the dehydrated Keronian out of their mouth. This does not kill the Keronian, but leaves them unable to move for several days until hydrated again. Once they have sucked a Keronian dry, the Nyororo glows a pale blue and then departs.[1] They are highly sensitive to hot and spicy food and would die if they consumed it (episode 161-b). They usually appear in a pillar of lightning. Tamama says that whenever a Keronian gets to much humidity a Nyroro will always find it's way to the Keronian.

While originally as Niroro, they can stretch their bodies and durable enough to resist hits from falling meteor chunks. They were also shown able to survive longer in a dry environment.

Some Nyororo are hiding in the territory of Pekopon.[cite this] (Keroro is not uncommon to find them). Despite Nyroro being well known enemies of Keronians, The Keron Army uses them as punishment for Platoon Leaders who don't turn in Battle Assignments. In episode 220, Kururu kept a Nyororo inside a small capsule to be used as a weapon during emergency. This was used against Sababa, an artificial Keronian that escaped from the pyramids after being imprisoned. But due to Sababa's body made from 100% sand and that he had no humidity, he easily escaped. 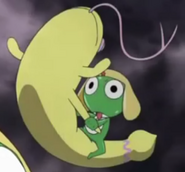 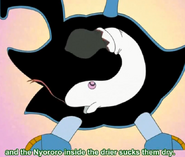 White Nyororo (episode 64)
Add a photo to this gallery

This article is a stub. You can help the Keroro Wiki by expanding it.
Retrieved from "https://keroro.fandom.com/wiki/Nyororo?oldid=46156"
Community content is available under CC-BY-SA unless otherwise noted.