Start a Wiki
This article is a stub. You can help the Keroro Wiki by expanding it.

O-Natsu (お-夏, O-Natsu) is a character in the Keroro Gunso series and one of the main characters in the Warrior Kero series. She is the partner of Warrior Giroro.

She looks just like Natsumi Hinata, which confused Keroro at first. She has dark pink hair held in pigtails by two clips that look like Starfruit, brown eyes and light tan skin. She wears a dark, raggedy brown kimono that is patched together, with a periwinkle obi and she wears a pair of geta sandals.

O-Natsu was happily living on Sengoku, when the Viper Brothers invaded and took over. At the same time, her grandfather fell gravely ill.

She is first seen by the Keroro Platoon after Giroro is shown walking away from his platoonmates, who are eating grilled squid from O-Moa's stand. She is shown to be standing in line for a comedy contest, and after Giroro exclaims Natsumi's name, she says her real name. She appears grateful that someone actually talked to her and ends up having Giroro fall in love with her, she explains that her grandfather has fallen ill and that she is entering the contest to get the money needed to cure her. She looks just like Natsumi, but with a nicer personality. In the second chapter, Giroro helped her at the comedy contest and she became an idol. In the last episode, she is revealed to be one of the guardians who saved planet Sengoku when her weapon came back to her and she remembered. 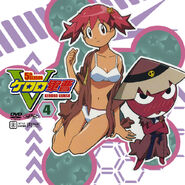 O-Natsu with Giroro
Add a photo to this gallery
Retrieved from "https://keroro.fandom.com/wiki/O-Natsu?oldid=47153"
Community content is available under CC-BY-SA unless otherwise noted.