Oka Nishizawa (西澤 桜華, Nishizawa Ouka) is a character in the Keroro Gunso Series. She is the wife of Baio Nishizawa, the head of Nishizawa Corporation, and the mother of Momoka Nishizawa.

Oka is a very talented fighter. She held a martial arts competition where suitors have to defeat her. Only Baio was able to defeat her, and she later married him and had a child, namely Momoka.

She appears only rarely as she is often traveling the world on a training journey. Many of her infrequent returns to the Nishizawa mansion involves her testing its defenses. If she can make it past all of the guards, the entire security force is fired (this has apparently happened several times).

Husband. Both fell in love during the martial arts competition. However, sometimes, he complains that Oka always shows her "normal behaviour". Mostly because he's more polite when it's about the family and relationship.

Daughter. There is something to consider: she has less chances to see her daughter than her husband. Even, at some point of her life decided to abandon her own dream in order to be able to share more time with Momoka. Unfortunately, this wasn't without problems, as because of repressing her harsh personality to do so, in nights, she went out of the mansion and fighted with anyone near her, all asleep. But, Momoka was able to stop this one night, even as both mother and daughter had to fight themselves. In the end, Oka promised to Momoka to continue her dream, even as with the cost of time with her daughter.

Manga only: Both met once, under weird circumstances, and quickly established a common link, because both are mothers that can't spend much time with their children. 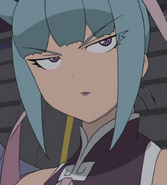 Oka on the cover of the Keroro Special Miracle Pack.

Oka as drawn by Paul.