Omiyo (お見よ commonly called Ghost-chan (幽霊ちゃん, Yuurei-chan)) or Ghost-Girl in the Funimation dub is a ghost. She haunts the basement of The Hinata's House in Inner Tokyo.

Omiyo has pale purple skin, long flowing indigo hair and purple eyes. She wears a lavender colored kimono with a purple obi and a small purple hedband. She is sometimes followed by glowing purple balls of fire.

When Omiyo is shown in her human form she has long indigo hair, pale white skin and dark brown eyes. She still wears her kimono, but she also wears geta sandles.

When not in ghost form, she transforms into a symbol resembling a running stick figure.

During medieval Japan, Omiyo met a Keronian that she called a Mr.Kappa, and the villagers believed the kappa was an evil spirit so they wanted to kill it. Omiyo decided to protect it, but the villagers locked her up. Soon she was forgotten, until the Kappa, grateful for her help, saved her in return. However, due to revealing his existence to humans, the invasion was cancelled and he was recalled back to Keron.

In the manga Omiyo died as a young girl, whereas in the anime she lived into her nineties, dying from a congenital illness, but she chooses to reappear in her younger appearance because she hoped that the kappa would recognize her. In the manga, Omiyo is a spirit bound to the interior of the Hinata residence, due to having being built over the prison, the last place where she saw the Kappa. In the anime, although she can move away from the Hinata residence without issues, she still resides there.

She was about to ascend once she saw Keroro with a plate on his head, resembling the Kappa, but Koyuki, by accident, stopped it by using her ninja powers to attack the ghost. Her attack was diverted to Keroro and the hat broke.

In the manga, at a certain point, Kururu builds a machine that reverses the living and the dead, resulting in bringing back Omiyo as a living person temporarily, which briefly allowed her to go outside to visit the grave of Fumyomaru, her cat which had died a long time ago, only to be surprised by his appearance there as a living cat thanks to the effects of the same machine.

In the last season of the anime, after getting her last wishes done by visiting an amusement park and getting acknowledged as a ghost there, she once again almost ascended, although in the end she returned to Earth due to having so much fun there and being unwilling to leave it. In spite of that though, later episodes still showed her residing in the Hinata's, rather than moving away to the park.

Omiyo's Keronian friend and her partner. They both appear to care about each other, Omiyo risking her life to save him. Kappa, in return, saves her as well, and when Omiyo dies, she chooses to stick around, hoping to see the Kappa one last time.

Omiyo is slightly jealous of Keroro because of Keroro's invasion plans, people don't remember her. However, after Keroro put on the Kappa's cap she thanked him. And even after it broke, she and Keroro still appear to be friends, as shown when Keroro invites her to multiple scary invasion plans, including Keroro's school haunting plan. He also trusst her enough to ask for help, as shown with Dokuku.

In the anime Natsumi is the only one who really notices her presence sometimes and usually she ends up scaring Natsumi more than any other character in the show. In the manga Natsumi initially has no ability to feel Omiyo's presence, but said trait later gets incorporated.

The relationship between the two developed very well: Omiyo helped guide her while she was a ghost on episode 178, and eplained her the life as a ghost. From then, they consider each other as friends. Omiyo helped her and Fuyuki in episode 184-a, and in return, Momoka helped her in episode 353-a, when she was about to return to Heaven. Along with Fuyuki, Momoka accomplished a wish she had and even beaten Newspaper Club's chief in order to notice Omiyo and get an article about her.

Natsumi may feels her presence, but Fuyuki is the only one who can recognize when she is close to people and and it is easy to him easy to communicate with her. He also helped her in episode 278-a (or at least, tried to) about scaring people, with Keroro and his platoon as support.

Aki bought the house that Omiyo roamed in, saying that not a lot of people would buy a cursed house. Omiyo apparently scares Aki as well, but because Aki is at home less, it can be assumed she has forgotten about Omiyo as well. 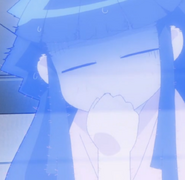 Omiyo on Cover of Volume 12 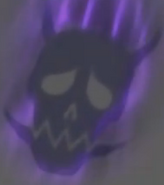 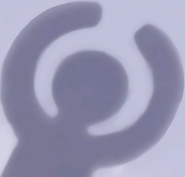 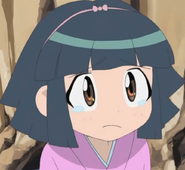 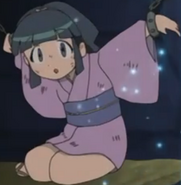 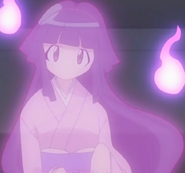 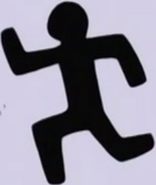 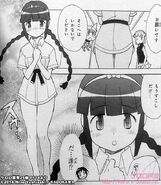