Shion - Pierre has always been there for Shion, he was the one who gave Shion her family's heirloom. Pierre will do anything to protect Shion, and is shown to care extreamly about her.

Terara - Pierre sees Terara as part of Shion's Family, much like Paul sees Tamama as apart of the Nishizawa Corporation.

Paul - Pierre and Paul appear to be friends, though if their mistresses orders have them to fight they do it. 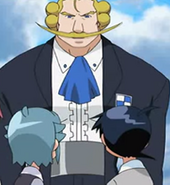