She is a Space Police that guards and patrols Alien Street. She is also in charge of kicking out Pekoponians when she spots them.

Her first appearance is when Natsumi and Fuyuki find themselves in a secret city called "Alien street". They meet up with Keroro and the others, but Officer Poyan appears to tell them that Pekoponians are illegal on Alien street, due to them possible finding out about all the aliens and risking everyone's lives. They then disguise themselves as aliens, and explore the city. When they are caught by Poyan at the end she scolds them.

In Episode 108, she appeared again when she meets Sayuri and trys to arrest her because she stole tried to steal a wallet. Tamama defends her and pretends that he's the responsible suspect for stealing the wallet. Poyan then tries to throw Sayuri in jail, only for Tamama to run away with her.

In her third appearance, she asks Natsumi to help her and Poyon arrest and find the Dekamimi Alien.

Her appearance is indistinguishable from a human. She has short teal hair with her two alien antennas sticking out and large purple eyes. She wears the typical space police uniform which consists of a very short skirt with a yellow stripe at the bottom and her top is a navy blue color with a police badge on it. 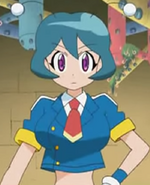 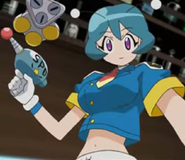 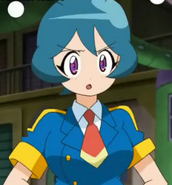 Add a photo to this gallery
Retrieved from "https://keroro.fandom.com/wiki/Poyan?oldid=46959"
Community content is available under CC-BY-SA unless otherwise noted.