One of the Space Policewomen. She always shows up just before Keroro Platoon successfully conquered Earth every time. She can travel anywhere instantaneously through the use of space portals. When she's coming out of the portal, she gets out very slow usually singing "Heave ho, Poyon Go". She ends most of her sentences with "poyo." It's revealed that Poyan is her subordinate.

"Poyo" is a typical word she uses in her sentences, such as when she descends from her portals.

She is indistinguishable from a human/pekoponian exept she possesses a pair of antenna on her head.

Poyon is first seen in episode 11, when her spaceship breaks down, Poyon is than left to fix it. However, at the end of the episode Poyon finally made it to Pekopon to arrest R Gray, 3M and The Camera Man, Mr. G for impersonating Famous Stars, she says that she has been tracking them down for a long time, and is glad that she finally was able to catch them. When Keroro asks what happened to the real stars, she says that they always make their journeys, making Keroro very happy. Poyon is later seen carrying the Fake's spaceship off of Giroro.

Poyon appears again in episode 60, when Keroro goes through space and time. Poyon follows Keroro and asks the guy in the blue car to stop. She than asks Keroro to go with her to the Police Station to do a report as he illegally went through time and went over the speed limit. When Natsumi Hinata asks if she can still go, Poyon says yes. She is last seen interacting with the Narrator when he asks how she is that small, Poyon simply says that she is a Space Policewoman.

Poyon in her swimwear in Episode 69. 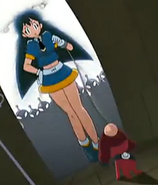 Poyon smile in Episode 290a 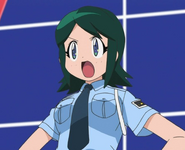 Poyon in Episode 343a (Last appearance).

Official reference sheet of Poyon
Add a photo to this gallery
Retrieved from "https://keroro.fandom.com/wiki/Poyon?oldid=50496"
Community content is available under CC-BY-SA unless otherwise noted.