The Probe Nightmare is a creature created by Meru to help find his next bride (Which turns out to be Natsumi.)

After landing on Pekopon , Meru decided that he had to find a bride so he told Maru to send out the Probe Nightmare and find the perfect bride. It landed on a small island in the Paccific ocean and someone from the Nishizawa Corporation found it and gave it to Momoka . Momoka than showed it to Fuyuki, hoping it would impress him. When it did she was very happy, later when Momoka invites everyone to the island the Probe starts beeping. 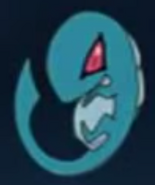 Add a photo to this gallery
Retrieved from "https://keroro.fandom.com/wiki/Probe_Nightmare?oldid=45902"
Community content is available under CC-BY-SA unless otherwise noted.