Rana (ラナ, Rana) is one of the main characters in Keroro Gunso the Super Movie 5. She is Io's sister and also a Mana in human form.

Rana, along with her brother Io, first appear when Fuyuki Hinata is worried about Keroro. Rana and Io appear to mess around with Fuyuki, until revealing themselves, they then catch Fuyuki after he faints.

Later on they managed to find Keroro, and than they proceed to try and roast him over a fire. After Fuyuki obtains a translator, they seem shocked, Rana is finally able to introduce herself, and is confused when Fuyuki calls Keroro, Keroro as both her and her brother call him 'Kainini' which means Gourmet (Much to Keroro's displeasure). Rana is the one who explains to Fuyuki and Keroro what Mana are. Rana and Io confess they are Mana, and proceed to disappear. When shown the statue, Rana says she has seen it, and is sure it's a moai, though she hasn't seen it on the island. Rana and Io soon warn Fuyuyki about putting the moai back on the island, saying Aku-Aku will find them and that they should leave, however Rana promises that she will return the statue. Rana is than shown clapping after Keroro's speech, saying he is brave.

Later, Rana and Io are shown traveling with Fuyuki, and she yells at him to hurry up. Rana is than shown talking about Maki-Maki, the god who created the island. When Keroro insults him, Rana insists he stops and when the weather changes, she says that the weather is what makes the island fun. Later when Keroro blows away, she and Io say it's punishment. Later on, Rana asks Fuyuki to hold her hand, Rana and Io than show Fuyuki and Keroro the island when it was still lush. They explained about Aku-Aku, and when the real one came Rana and the rest of the Mana's tried to shoot him down. However, Aku-Aku proved to strong, and vanished.

When the Keroro Platoon appeared, she and Io were prepared to eat one. Later she warned everyone about Aku-Aku popping up from the ground. She witnessed Kururu and Tamama getting eaten, and when Dororo was told them to leave, she listened. Rana saved the gang from getting hit with the Kero-bot by speeding up time, however she was weakened slightly. Then, when Aku-Aku escapes she and Io are worried something will happen to Rano Raraku. Rana than says that the man in the moai must love Fuyuki a lot to try and protect him, and she is the one who states that Aku-Aku hates water. When Keroro resonances she says that it is amazing. Rana is than shown talking with Io about Fuyuki's plan, and when Io decides to save Keroro, Rana is against it. Rana is also the one who says that Keroro is still alive.

After Aku-Aku is defeated, Rana says that Io is still alive and that he was very proud of Fuyuki. When Fuyuki finally explained what friends are, Rana states that everyone is her friend and that all Mana will disappear, but they will protect people forever. Rana waves good bye as she disappears along with the rest of the Mana.

Io - Io is Rana's brother, Rana cares deeply for him, and usually copied him. Rana tried to stop Io from going after Keroro, but after his death Rana said he was happy. She later joins him in the end of the movie.

Keroro - Rana and Keroro may have gotten off to a bad start, but in the end Rana counted Keroro as a friend. Keroro usually got annoyed when Rana called him Kainini, and Rana usually joked around with Keroro. Keroro easily amazed her, and when he turned into Meki Meki, she fully supported him.

Fuyuki - Fuyuki and Rana hold a very deep friendship, both Fuyuki and Rana show a deep love for Easter Island, and Fuyuki did hold a small crush on her when they first met.

Rana considers everyone her friend, and says it's her duty to protect everyone.

Keroro Platoon - Rana sees the other members of the Keroro Platoon food as well as Keroro. She also calls them Kainini, but during the end she seems to have forgotten about it, and considers them friends.

Akuaku - At first Rana disliked Akuaku very much, she considered them to be trouble makers. And when he came back to life, she showed a slight fear of him. After his defeat by Keroro, Rana begrudgingly called him her friend. 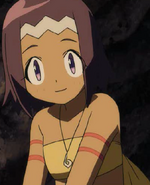 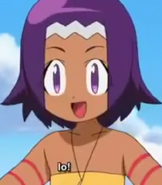