Rei first appeared in episode 61, where she was a transfer student at Kissho Academy. Immediately bad things start happening in the classroom. Later on, Fuyuki is holding an Occult club meeting and Rei appears as a member of the club. Once again bad things happen, and Momoka starts hating her. When Fuyuki mentions finding a rock when he was little. Rei instantly asks if they can see it, when The group is walking it suddenly starts to rain. When Momoka brings out an Umbrella, Rei grabs it and quickly gets electrocuted. Meanwhile at the Hinata Household Rei and Momoka are getting dried off, as more bad things happen to Rei such as Natsumi spilling drinks on her. When Fuyuki is looking for his rock, and mentions Keroro, she questions what he meant. Momoka finally has enough of Rei and is about to tell her to lay off Fuyuki when Rei has disappeared. She appears again in Keroro's room as she asks for her Lucky Stone back. Keroro, however doesn't want to give it up, and he reveals that she is actually an Atarunian. Rei asks Fuyuki if he remembers her, Fuyuki suddenly remembering seeing Rei crying in the sandbox where he found the stone. Fuyuki tries to get the stone back to give it to Rei, however the stone lands in Momoka's hands, as Fuyuki kisses her cheek. Before anything could happen, Rei stops time, and gets her stone back. She thanks Fuyuki for everything he has done, and she leaves, wiping out everyone's memories of her. Later on Fuyuki still has the handkerchief Rei lent to him as he wonders why it feels familiar.

Rei first met Fuyuki when she was little, and sad that she lost her stone. Fuyuki helped cheer her up, and Rei has since that day never forgotten about him. When they meet again Rei treats Fuyuki kindly. Offering her handkerchief to him when it starts raining. Before Rei leaves Earth she thanks Fuyuki, and in the Funimation dub she says that if anyone were to have found her stone, she was glad it was him.

Momoka hates Rei, seeing her bad luck as an attempt to steal Fuyuki from her. She gets very mad, and tries to have Fuyuki's attention on her whenever Rei is around. However, Rei seems to see Momoka as a friend not a rival for Fuyuki's love, as she saved Momoka from getting electrocuted. 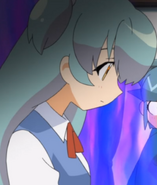 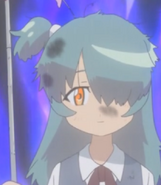 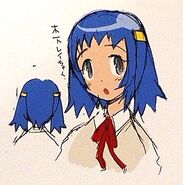 Mine Yoshizaki's unused original design for Rei.
Add a photo to this gallery