Samama (サママ, Samama), a Keronian, is a character featured in Keroro Land vol.3, among other fan designs chosen to be redesigned by Mine Yoshizaki.

Her design and name are inspired by Natsumi's. She was introduced in the "New Recruits" section of the Keroroland magazine Vol. 3. Several characters introduced in that section went on to appear in the anime, but none of them ever joined the Keroro Platoon officially.

The original fan sketch mentions that it's an artificial Keronian made using Natsumi's DNA. However, Samama's final design hasn't appeared in any official Keroro product with story content, so she has effectively no storyline at this point.

The official comment included beside her redesign in the magazine is just a question about Giroro's feelings regarding her.

Samama's original design had orange colored skin, a red hat and a red crystal as a symbol. The official design has red skin, pink hat and her symbol became a stylized "n", strengthening her connection to Natsumi. The hats of both designs are shaped after Natsumi's hair style. Her eyes, though generally shaped like Natsumi's, are orange colored and lack pupils (a characteristic shared with a few other keronians like Dororo). 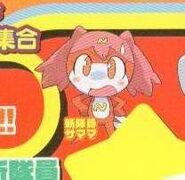