Satsuki Shiwasu (師走 さつき, Shiwasu Satsuki) is a character in the series Keroro Gunso. She is one of Natsumi Hinata's friends.

Satsuki, much like Natsumi, is heavily a tomboy. She plays many sports, much like Natsumi, and seems to have a mad crush on her. Satsuki acts like an average high school girl, showing herself to be very forgetful, as shown in Episode 82 where she mistakes writing a calligraphy character.

Her name comes from the traditional Japanese names of the month of May (Satsuki/皐月) and December (Shiwasu/師走).

Satsuki and Yayoi trying to get Natsumi to join a club. 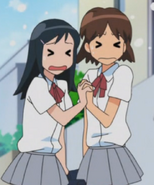 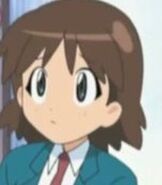 Add a photo to this gallery
This article is a stub. You can help the Keroro Wiki by expanding it.
Retrieved from "https://keroro.fandom.com/wiki/Satsuki_Shiwasu?oldid=48693"
Community content is available under CC-BY-SA unless otherwise noted.