Sayuri (サユリ, Sayuri ) is a character in the Keroro Gunso anime.

She is an alien thief from the "Planet of the Artists", which has the same pronunciation as her name.

Sayuri looks like a regular human, except she has cat ears and tail. She has brown skin, teal eyes and light red hair. She wears a teal dress and wears yellow earrings.

Sayuri appeared to be calm, collected, and kind at first. Before she attempted to steal Tamama's wallet, Sayuri successfully seduced him.

Her only appearance was in Episode 108, when she attempted to seduce and pickpocket Tamama in a bar, thinking he was rich. After Sayuri successfully pickpocketed Tamama, she realizes that deep down Tamama was really still a child. She returns his wallet, however, Poyan figured that Syauri was stealing Tamama's wallet.

Tamama vouched for her because he fell in love with her, but he instead uses his Tamama Impact. After Tamama and Sayuri escape, Sayuri questions why Tamama saved her, Tamama saying that she isn't evil. Sayuri then returns Tamama's wallet and vanishes.

Tamama - At first Sayuri seemed to only want to steal Tamama's wallet, but after Tamama vouched for her and helped her escape, she seemed to grow to find him likeable, and later returned his wallet. To prevent Tamama from getting arrested she left.

She has the ability to move her hair at her own will. 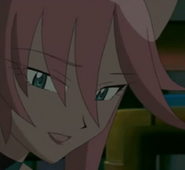 Add a photo to this gallery
Retrieved from "https://keroro.fandom.com/wiki/Sayuri?oldid=46690"
Community content is available under CC-BY-SA unless otherwise noted.