Senshu Hinata (日向 千秋, Hinata Senshuu) is a minor character from the series Keroro Gunso. She is the grandmother of Akina Hinata.

Senshu Hinata died when Akina was very little, so Akina, now a grandmother herself, always longed to see her.

An alien from the planet Kawaru, a race with metamorphic powers, who was helped by Akina Hinata, transformed into Senshu Hinata before leaving the planet as a way to thank Akina for her help. According to Kururu, he did that because Senshu Hinata was the person that Akina wanted to see the most.

Her name isn't mentioned in the story itself, but it was revealed in an extra feature of the 5th DVD of the 3rd season. 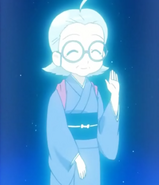 Add a photo to this gallery
Retrieved from "https://keroro.fandom.com/wiki/Senshu_Hinata?oldid=37584"
Community content is available under CC-BY-SA unless otherwise noted.