Seven of Seven (七人のナナ, Shichinin no Nana) is an anime series created by Yasuhiro Imagawa and produced by A.C.G.T. Nana Suzuki is a junior high school student who ends up split into seven aspects of herself after an accident with her grandfather's experiment to create a crystallized rainbow.

Keroro Gunso's mangaka, Mine Yoshizaki, created the character concept designs for Seven of Seven. As such, various crossovers exist between the series. The character Mutsumi Hojo, who appears as "Examinee 623" and the host of his own radio program in 7 of 7, is a major character in Keroro Gunso. Melody Honey, a minor character in Keroro Gunso, appears in three episodes and has her background explored in this series. Omiyo, the Hinata residence's ghost, makes a brief participation in one episode, although a different legend is associated with her in this anime. Keroro himself makes various background cameos as plushies and merchandising packages.

Elements from Seven of Seven make a few background cameos in the Keroro manga, like in Volume 5 Natsumi is briefly split into seven, mirroring the Nanas, during a board game punishment, and the vice-principal and assistant from Nana appearing in the same role for Kissho Academy during a short parody story. In Volume 6, Tamama rides the fish mascot Billy in a special illustration and there is a flashback panel with a younger Fuyuki carrying a Nana Ranger mask in a festival.

In addition, episode 89 of Keroro Gunso, Giroro: The Man with Seven Faces de arimasu, features a plot that splits Corporal Giroro into seven personalities, most of whom resemble Nana's split personalities. A segment of the episode featuring Mutsumi takes place at the cherry tree seen frequently in Seven of Seven.

Later on, in volume 18, the Keroro manga would feature a group of seven female ninjas called "Nanatsu", whose appearance, personality and even the name of one of their members, who introduces herself as "Nana" to Natsumi, was identical to the seven Nanas from Seven of Seven.

A cameo of a simplified version of Keroro's design in Seven of Seven (see the purple box).

Melody Honey in Seven of Seven.

The legendary hill and cherry blossom tree from Seven of Seven as shown in Keroro episode 89. 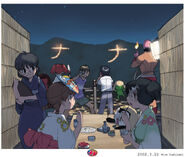 Nana, Hitomi and Yuichi from Seven of Seven hanging out with characters from Keroro and Arcade Gamer Fubuki.

The Seven of Seven manga started production after the anime but was released before it. However, it doesn't use Mine's designs or characters.

Mine's take on the manga Nanas.