Shion is shown to be a pale skinned color, with sky blue hair styled into pig-tails held by a blue and white ribbon, and blue eyes. She is usually seen wearing a dark blue coat with a blue and white bow on the collar of it, a white mini skirt with long white stockings, and black/dark brown slip ons. Shion also is seen wearing a blue beret, but Terara now wears it. Although, it appears Shion got a new one.

She is initially felt alone for much of her life. Through an heirloom she inherited when her parents died, Shion learned of the Earth Dragon prophecy. She sets the events of the movie in motion by turning Tamama, Giroro, Kururu, and Dororo into dragons as part of a warrior program. Eventually learning a secret in the spellbook she used, and learning that she is not alone, she helped to stop the Earth Dragon.

Shion is Momoka Nishizawa's best friend from France, as both of their families are rich and noble. Pierre is her trusted butler similar to how Paul is with Momoka. After her parents died she was given the dragon book. Nobody else could read it but when she looked at it she said the words appeared in her head. She was able to hear the earth dragon's voice. She also summoned the dragon's tails to spread across the world. She later invited Momoka & Tamama to her home in France. While they were there she began transforming the rest of the Keroro Platoon into dragon warriors. She succeeded in transforming all of them until Keroro & the Hinatas arrived to help Momoka and cannot capture Keroro and transform him. She travels with the Hinatas and Keroro to destroy the Earth Dragon's egg and there she transformed Keroro to help his friends. When the Earth Dragon is summoned and threatens to destroy the Earth she appears to sacrifice herself but she and the Platoon members are all okay and back to their original selves. She appears holding a glowing blue egg which soon hatches in to Terara the Keronian form of the Earth Dragon. Shion later attends school with Terara wearing her hat and the other Keronians and their partners occasionally visit her.

She also makes a cameo appearance alone in manga chapter 140 seeing Momoka off from France and with Terara in episode 282-A in one of the pictures. Apparently, Momoka stayed in France (presumably with Shion) for two years, suggesting that they are very close friends.

She made another appearance in episode 356a of the anime.

Shion as she appears in Episode 356. 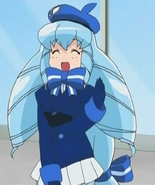 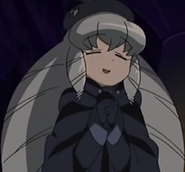 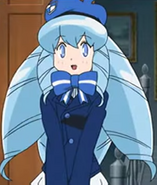 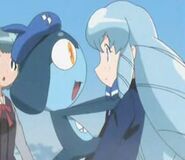 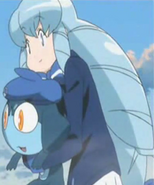 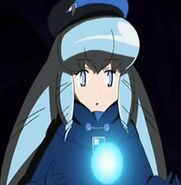 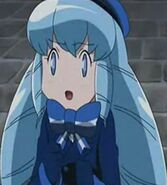 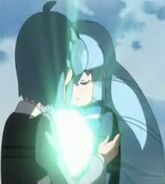 Add a photo to this gallery
Retrieved from "https://keroro.fandom.com/wiki/Shion?oldid=43965"
Community content is available under CC-BY-SA unless otherwise noted.