Shivava is a stuck up Keronian who thinks of himself as the "main character". He left Keron because it was "too small" for him and joined forces with the Dark Keroro Platoon. He is rivaled with Tamama.

He is the type that does things the way he wants due to his ego. It is also evident in his speech. His speech pattern is that of someone who would be described as "rebellious" and "active".

Shivava appeared in Volume 23 of the manga. Shivava is seen training in outer space but he accidentally hits and shatters the peculiar asteroid and something emerges from the asteroid. He battles the mysterious creature and he loses, becoming critically damaged.

Despite having just met him, Tamama became jealous and attacked ferociously but was defeated. After Shivava's defeat, he tells Tamama to become his student, as Tamama angrily refuses.

Shivava seems to recognize him in the unknown history, he is described as the "Non-Keronian" and he taunts Shivava saying that his youth disgust Black★Star.

Shivava can use his staff as a weapon, and has many attacks that include his staff including The Universal Super Whirl Wind.

Shivava's name is derived from Shiva, a Hindu god who is known to be great and all powerful, which is how Shivava sees himself. 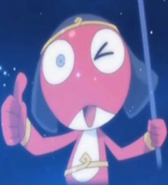 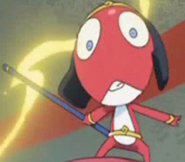 Add a photo to this gallery
Retrieved from "https://keroro.fandom.com/wiki/Shivava?oldid=47372"
Community content is available under CC-BY-SA unless otherwise noted.