Shupepe (シュペペ, Shupepe) is a childhood friend of Kururu and Rinono who appears in Chibi Kero: Secret of the Kero Ball!?.

Shupepe is first seen walking with Rinono and Kururu when Kururu found the Kero Ball. Shupepe later appeared in Episode 228 where a flashback is seen with him, Keroro and Giroro together eating ramen. And it appeared that he was friends with Chibi Keroro , Giroro and Zeroro . (Though he forgot about Zeroro.) He sent them the bill to the meal that they ate. And it appears that he is now a great Keronian in the Keron Army.

He is a grayish-purple in color, wears a periwinkle hat, and has a bandage over his nose. Shupepe wears blue-rimmed headphones similar to those that Kururu wears as an adult. His symbol is a bandage that is blue on his belly and white on his hat. He has a tail which means he is a young keronian. 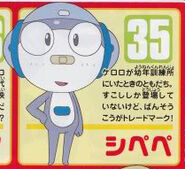 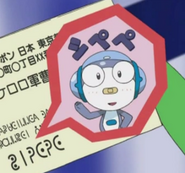 Add a photo to this gallery
Retrieved from "https://keroro.fandom.com/wiki/Shupepe?oldid=45914"
Community content is available under CC-BY-SA unless otherwise noted.