Tororo (トロロ, Tororo) is a member of the Garuru Platoon in Keroro Gunso.

He is ranked recruit (新兵, shinpei)[RANKS] and he is voiced by Kappei Yamaguchi.

Like Kururu, Tororo is the team's intelligence officer and hacker. He captured the allies of the Keroro Platoon until the computers were damaged by Dororo's deathblow. He laughs similar to Kururu (pu pu pu).

Tororo is a salmon-colored Keronian tadpole. He wears a green helmet, has glasses with two circles inside. His symbol is a circle with squares sticking out.

According to Kururu, Tororo was his rival back on Planet Keron because of his desire to prove others of his higher intelligence than anyone and to put Kururu down. Because of Tororo losing to Kururu several times, the young, twisted, and mad genius attempted attacks upon him, though, he could never gain his desired victory.

He challenged Kururu during the first fight against the Garuru Platoon. Tororo successfully hacks his rival's system, gaining control of the Keroro Platoon's weapons. However, his victory was short-lived, and Kururu hacks him back, even mocking him that the system that he used was a pitiful copy of Kururu's own program. Kururu proceeds to crush him. He departs Earth along with the rest of the Platoon, defeated and humiliated.

He appeared again in Episode 130, where he and the other members are investigating other planets. The aliens show the Tororo and his platoon that the Keroro Platoon is the main suspect. After Tororo and his platoon catch the "Keroro Platoon", Tororo confronted Kururu. After Kururu avoided Tororo's barrage of missiles, he was forced to push the button to release all the energy made of electricity, despite his platoon begging him not to do it. Tororo was electrocuted and the ship exploded. The fake Keroro Platoon were severely damaged and turned back to their normal dummy form. He then visited the real platoon in unwanted honor and left with his leader and members.

In Volume 19, Tororo hacks Keroro Robo while Keroro was piloting it through a neural link, causing Keroro to transform into a form resembling Dark Keroro. After Giroro and Tamama destroyed the Keroro Robo, he was defeated by Kururu's counter-hacking, causing his computer to explode. 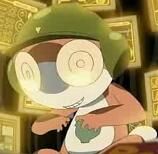 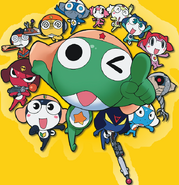 Tororo on the cover of the Keroro Special Miracle Pack.