Viper Momi (ヴァイパー モミ, Vaipā Momi) also known by her human name Momi Tosakuni (土佐国 モミ , Tosakuni Momi) is a character in the Keroro Gunso Franchise. She is a human girl who has inherited the powers of the Viper Clan.

Before Momi could transform into Viper Momi, she had fair skin, waist-long black hair, and she stated that she was blind. She was seen wearing a dark jacket with the sleeves tucked in, a white skirt, striped tights and boots. she was also shown wearing a scarf and some gloves.

When she turns into Viper Momi, she gains a new look. She still obtains her fair skin, but she has long silver hair that turns into shades of blue and purple tied into two pigtails held by orange-pink bands. She has amber eyes and the viper symbol in purple on her head. She wears a orange-pink dress with lace at the end tied in the middle by a small pink snake-like ribbon, a sleeveless lavender vest with a scale like pattern running down the middle, long white stockings, yellow leg warmers and white slip ons. She is accompanied by 3 large white snakes with small v's on their heads and can move. She has two on each of her hands and one wrapped around her neck. As a human, she no longer retains her blindness.

Even though Momi wants to be a villain, she is actually a kindhearted, innocent girl, and she never wants to harm the innocent, for example, Momi threatened once to drown Fuyuki Hinata at swimming pool if Keroro didn't surrender, but she tried to save Fuyuki later after discovering that he can't swim. She also gives the Keroro Platoon her chocolates, which are too sweet, during Valentine's Day. She also becomes cowardly when she sees the Keroro Platoon overpowering her. She often spends her days playing at the park with the local children, who adore her.

Despite this Momi tries to act threatening and tough, though this usually fails.

The Keroro Platoon have defeated Viper again. Viper states that he is tired of his defeats and he that he is getting old.

When he finds his gun is missing, Momi picks it up for him, Viper is surprised and asked why she wasn't amazed to see him. Momi reveals that she is blind after an accident that happened a long ago. Feeling sympathetic, Viper gives her the "Revival Fruit" as a thank you for picking up his gun and leaves Pekopon.

Later on, when Keroro wants to meet Viper again, Momi goes instead to tell him Viper's words, "Viper wants to compete with him, but his old age stops him from doing so. Farewell Keronian". Momi's blindness is cured as she opens her eyes and begins her rivalry with Keroro with her new name, "Viper Momi", as she transforms into a Viper Humanoid. The entire Keroro Platoon is defeated by her, except Kururu and Dororo. Then Momi confesses that she just don't want to disappoint Viper's request. The Keroro Platoon leave and Keroro says he will beat her someday, but thanks Viper for letting him see new interesting things. Keroro also comments that Momi is better than Viper.

As Viper Momi, she has a multitude of abilities, all of which begin with Snake Miracle.

Viper Momi considers herself an employer and friend to Viper. They first meet after Viper loses to the Keroro Platoon, she helps by returning his canon to him and he, in return, restores her vision. She is later shown later in chapter 232 as working under Viper, getting worried when her radio transmission device, the only thing that enables her to talk with Viper, is bugging out.

While at first it appeared Momi wanted to fight with Alisa, it turns out Momi was just interested in hanging out with Alisa. In Volume 26 chapter 242, Momi invites Alisa to eat some ramen and it turns out both Alisa and Nevula enjoyed it, the duo becoming friends with Momi.

Viper Momi on the cover of Book 25. 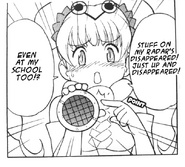 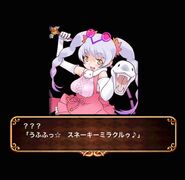 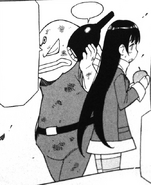 Add a photo to this gallery
Retrieved from "https://keroro.fandom.com/wiki/Viper_Momi?oldid=47250"
Community content is available under CC-BY-SA unless otherwise noted.