Yamato is first seen as a transfer student along with Hikari and Fuchiko in Natsumi's school.

She was introduced as the transfer student in school, and she was seen in the lunch room ordering some food from Tamama and was eating fast, her appetite is not ordinary for the Pekoponians according to Kururu. She was seen eating again alongside Fuchiko then suddenly they developed stomachaches and grew larger, revealing their alien forms, gone berserk. After Pyonta's arrest, they were sent back home to their planet.

In her human form, she has short messy hair that its brown colored. Her eyes are shiny and its colored reddish pink. Her ears on her head are yellow colored resembling cat ears. In her Dekamimi form, she is in the form of the yellow rabbit.

She is very gluttonous just like Fuchiko, as she is seen eating really fast in the lunch room. Yamato is shown to be more vain than the others, as during class she is brushing her ears. Yamato, just like Fuchiko is only heard saying meow.

Her name and appearance are based on the character Dejiko of the anime/manga series Di Gi Charat. Like Yamato, Dejiko ends all her sentences with the word "nyo". 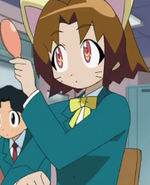 Add a photo to this gallery
Retrieved from "https://keroro.fandom.com/wiki/Yamato_Nadeshiko?oldid=53381"
Community content is available under CC-BY-SA unless otherwise noted.
... more about "Yamato Nadeshiko"
RDF feed
Maintenance
NJ +