Zurara is a dark teal Keronian in Keroro Gunso. He was the leader of the three bullies who picked on Keroro, Giroro, Dororo, and Pururu when they were younger back on Keron wanting to claim their clubhouse.

It was revealed in episode 183, Zurara and his sidekick, Gururu, were expelled from the Keron Military Academy after a teacher witnessed them beating up a teenage Garuru, who was defending Keroro from the two bullies. Zurara and Gururu made a reappearance in episode 285 as adults, the third bully however, did not show up, as he didn't help in the beating of Garuru. He is also a planet robber alongside Gururu, but later they were arrested by Poyan after receiving a present and going home in their spaceship. 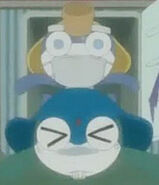 Retrieved from "https://keroro.fandom.com/wiki/Zurara?oldid=39758"
Community content is available under CC-BY-SA unless otherwise noted.